At a family lunch today in London, I read the following message about my deceased brother:

Words. Dave was not a traditional scholar. He used words to argue his way out of trouble. Dave was always in trouble. He operated in a world different to ours. A world where rules were to be challenged even subconsciously.

At 7 years old, I compiled a brief booklet on my family. This is what I wrote (verbatim) about Dave:

“My brother he is an active boy, when I do teas him he calls me you are raw and he licks to eat ice-cream but he is nautey and cheeky, he does not lick to do work or read. he dus tell plenty lieys, he plays criket and ride bikes, his name is david, he is 10 years old.”

Even at such a young age, Dave operated at a different level and that continued into adulthood. What his death has reminded us, is that despite this, Dave was a sounding board for many who themselves were at odds with the world. As a counsellor, words were his medicine to others.

It is fitting then, that today we have Scrabble letters from his Scrabble set scattered across the table and his name in bold letters. I cannot personally comment on his adherence to official game rules although I probably can make an educated guess, but he did spend hours playing the game with girlfriends. 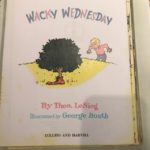 We also have a copy of a book called “Wacky Wednesday” here. The real book is almost in tatters due to sibling rivalry of many moons ago. Short on advanced word use, looking back, this book does depict Dave’s inner crisis from an early age. A young boy who is required to be at school but finds out that the world is upside down and not as it is meant to be. The boy’s Wednesday ends on a calm note. For Dave, calm was elusive. 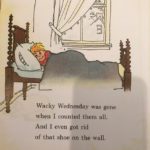 All Dave wanted, was to be blessed with order acceptable to him, serenity and eager listeners.  Hard as it was at times, we, as a small family, had our ears plastered to the phone on most days. I would phone Dave as I left work and he would still be talking, 25 minutes later as I drove into the garage at home, without me having said a thing other than “Hi, how are you?“! He had a lot to say on good and bad days, but the tone differed remarkably.

Despite the unbreakable diamond being his birthstone according to modern writings, our Dave was not unbreakable. Being bestowed with the element of water, Dave began to tread water as the years went by. So it was that he reached his tipping point on his 45th birthday and he chose to leave this world. As part of honouring his memory and saying farewell from this world, messages in bottles, written and addressed to Dave by those who attended the Tibetan Buddhist bardo ceremony (in Cape Town) marking the end of his soul’s transition, were set out to sea on a clear winter’s day two Sunday’s ago. 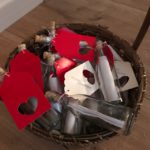 His departure has made many of us look at things in an altered way. With the passing of time, the stars at night now seem to chatter, the birds have become comforters, the rain is precious and the landscape seems robust and protective. All this is part of a greater conversation of the universe with us, saying that Dave is at peace, he is whole and filled with self-acceptance. Finally, his spirit is one of love, spelt-out on a giant cosmic ruby, the stone for those born on a Tuesday.

To close, I quote a portion of a very old invocation from India which has been translated from Sanskrit to English: