Tools of the trade

“Bang, bang, oops, ouch, dammit, [swearwords], watch-out there is a projectile nail, don’t worry, all is under control”.

These are the words that Husband heard from downstairs whilst I was trying to bash 2 steel nails into the wall to hang 2 small frames over the weekend. There have been times that my DIY skills have been lacking to such an extent that Husband ends-up with more work. Once, I used the claws on a hammer to remove 2 nails from a wall. The result was that the nails were removed but the holes that I left behind were so large that Polifilla would not do. Husband had to fill-in these craters with cement whilst I swept away the debris as though it were a Chapmans Peak rock fall.

When I moved out of residence at university many moons ago into a flat, one of the most important items that my mom bought for me was a toolbox with the most needed tools therein. She said it was important that I knew how to do basic DIY. My mom of course was talking from experience of two extremes: she had grown-up with a father who was a mechanic with outside and inside workshops, and she married my dad, a mining engineer, who did not know how to use a drill.  A few years ago I had to delve into electrical regulations for work and battled away with the electrical engineering terms.  I asked my dad for assistance. He responded: “Chrissie, I am a mining engineer. I only know how to blow-up things”.

When Husband and I moved in together, my toolbox was expropriated by him. Only 16 years later did I manage to get back my tools and my own tool box which is actually a tool box from my grandfather. The lapse of time has meant that my once meagre DIY skills are now very poor. When I need to tackle a large DIY task which requires brute strength but my hints to Husband go unnoticed, I have a trick.

I go downstairs to the storeroom and I find the ladder. I then drag it (within earshot of Husband) to wherever it is meant to me, I take the largest hammer I have and start to bash the wall.  With memories of the holes that needed cement still fresh in his mind, Husband is forced to assist as he starts to hear paint and plaster drop to the floor in chunks. He has learnt that it means more work for him if he leaves me to dabble in DIY hence it is best that he stops me in my tracks.

My problem is that I am stubborn and independent.  I want something fixed and it must happen now. Despite having my tools back, Husband says that they are samples and not real tools.  Apparently my electric screwdriver, orange interchangeable screwdriver and hammer are so useless that even a toy shop would not stock them. Whilst I do not agree, I have to admit that when Husband arrives with his power tools it is a case of kiddies animation versus a scene from The Following. There is no comparison.

For now, I will continue with my own tools. Sometimes I do not even need tools and I improvise: like the time the desk plug got stuck in the socket and I used a steel letter opener to get it out. The result was that the plug did come out but I managed to shock myself, blow the globe and my letter opener has a large dark bite out of it! This is where Husband’s real fear lies. It is the fear that even without real tools, Wife is able to cobble together things and make a real mess of something that was not in the beginning broken. And who has to save the day? He does. 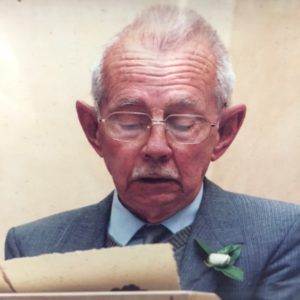