We had a false start. The one car’s battery was flat. I know that my deceased grandfather, Ted, who was a mechanic, had secretly planned this test. Fear not, Husband was there. In less than 10 minutes, we were off. Our Groot Trek from Irene in Gauteng to Somerset West in the Cape. A road trip that would take 2 days, have countless fuel stops, lunches at Wimpy’s, an overnight stay outside Colesberg, glimpses of rain in the Karoo and lots of biscuit eating. 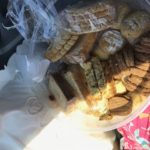 Leaving after us would be the moving van. I must pause here. The word “van” is misleading. The massive vessel was equivalent to three individual moving vans and had to be packed using a smaller shuttle van that could get up the driveway. The moving company had thought that the one super-carrier (think warship but on a peaceful mission) would be enough yet on the last packing day, an additional trailer which was half the size of the super-carrier arrived.  Husband and I only arrived on the last day of loading-up. 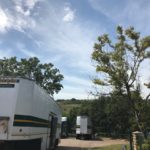 part of the carrier van entourage

We had no idea what had been packed and were under a spell that over the past few months, many items had been sold, gifted or donated. What we did see was the tail-end of the possessions which included countless garden chairs (some with bug patterns, some with flowers, some made to look old and some made to look new), rows of pots for plants (some with decorative frogs, a few painted and some with geometric patterns) and then we found the countless bird baths. I had no idea of the lurking complexities of what else had been packed. 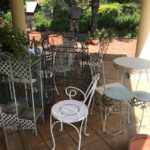 The two cars that we traveled in were packed to the roof. In one car, all my dad’s hats were laid out in a row hiding suitcases, baskets, make-up bags (not for my dad) and semi-décor items that my dad did not want my mom to know he had packed, and things my mom did not want my dad to know she had packed. There was lots of this skulduggery going on. 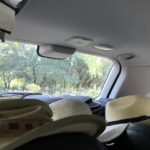 Then there was the suitcase of Jewellery with a capital “J”. It was referred to in hushed tones and carefully carried around when we stopped for our overnight stay. I can only imagine that many gold and platinum items with precious stones were carefully packed in it. My mom had other bags for the rest of the jewellery with a small “j”. This included all the pearls, costume jewellery and all other jewellery sourced from places around the world.

Now it is the “around the world” part which is the problem with this move. Add to this the embedded memory my mom has of almost every item she owns, including those items I would put in the “time-out and over bin”. By this I am referring to an animal print broom my brother gave her (shame, bless him), 80’s shoulder-pad jackets my mom made for evening functions here and abroad (think Japan and London’s Guildhall), paintings from overseas such as Cambodia, carpets from Turkey, tables and terrines from Morocco, lamps from Hong Kong, trinkets from China, keepsakes from Alaska and so many things, places and memories that my head is starting to collapse. It has been captured by The Move. 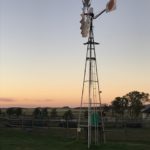 A flaw in any moving exercise is that things need to be unpacked at their destination. This is all quite fine, size-wise, if you are going from a shoe box house to The Saxonwold Compound. Similarly, where you are going from an Irene French-English country house with so much space you could lose your husband on the first day of living there, to a much smaller yet elegant house amongst vineyards, there is a pressing challenge. Note that the challenge is not that your husband is now unable to disappear in the vastness of a home. Or perhaps that is a topic for later. 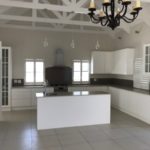 Having spent two Saturdays at the new house in Somerset West just organising and unpacking, I am seeing the truth. If it is not boxes with labels like copper, quiches, hangers, Christmas, quiches (again), copper (again), Christmas (again), books (again and again), wine (a modest supply considering the new home’s environment), women’s apparel (I am not going to comment on these big boxes and I reserve comment on all the slippers …. other than that I have never seen my mom in slippers for longer than 10 minutes in all my 43 years!), fishing equipment, slippers (again), teapots, tinned tomatoes and teapots (again), it is things in bags, bags in bags, bags hanging-off things, umbrellas, bed covers, jerseys, shoes and serving dishes of every shape: fish, chicken, flower, spinach leaf, bread, round, oblong, square, raised, flat and with/without a lid. Not to mention the cake stands. Sigh.

My little Mini which travels to Somerset West arrives empty and leaves full. Next weekend, we will go on the motorbike and Ivy can be in the top-box, goggles and all (of which my mom has plenty to share). We cannot take home any more tins of tomatoes, linen, trinkets and goodies. Our house is simplicity at best. My goal is to keep it that way! 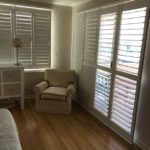 yes…we did take a chair…