The tortoise and the hare

One day you, the husband, come home. You live with fish, cats, worm-farm worms and a joyous wife. But you are advised that the family is adopting a rabbit. All seems well. Then the following week, another rabbit is brought home. All remains well. That weekend, you have a laughter-filled dinner with your neighbours and the spouse agrees that two homeless but domesticated tortoises will be homed by you because they cannot be released into the wild. All appears to remain well. Then the next week, you get an email from the spouse. She says that the family has adopted a lion for a year. All is not well. Lions eat cats and rabbits. It is time for a family meeting.

No need for that in the end. In fact, all is beyond well. The lioness, Aneta, lives at the Drakenstein Lion Park outside Paarl, Western Cape. She was originally part of a Romanian circus. Aneta’s life was destined to be one of cruelty. Entertainment for humans was her sole purpose. Thankfully for her, she was saved from this life (albeit she had to endure over a year and half in a concrete jail crammed with other lions) and now spends her days at the Lion Park. Please do not get this confused with the notorious lion park in Gauteng. That is not a sanctuary but a glorified zoo. Humans learn nothing about animals in such an environment. All it is, is human entertainment at the expense of animals. Whilst the life in Paarl is not a replica of life in the wild, it is as close as a human-damaged lion can get to living free and unburdened. 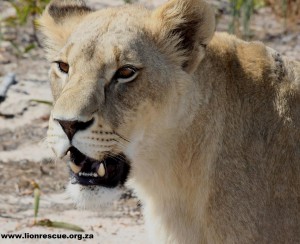 Our home has become a sanctuary for quite a few animals now. We cannot adopt anymore animals unless we do major excavation work and build another garden on the roof (perhaps we can have a family meeting and debate the feasibility of this….). Then again, the rabbits are doing a superb job of excavating the garden! Who knows what will pop-up next in the garden via a rabbit tunnel? When the tortoises arrive, it will give new life to the story of The Tortoise and the Hare.