The real voyage of discovery

When someone you love dies, one expects an internal soul searching process to flow.

On my brother Dave’s death, there was no conscious soul searching other than to wonder why it is that some people suffer needlessly on this earth. This refers both to Dave and our family because his well-being was our family’s well-being. Dave’s rocky journey on earth, with potholes, bumps and blind corners, affected the family as a whole. His final dead-end in the road, suicide, was the culmination of over 4 decades of stop-start.

A year after his death, it came to me.  In the words of the French writer, Marcel Proust, “The real voyage of discovery consists not in seeing new lands but in having news eyes”, one day I could see and discover. I realised that I had something he did not have in life. This was not something material or tangible. It was a freedom and independence: the ability to make my own decisions. Dave may have had the ability to make his final decision to end what remained of his tenuous life, but his adult life was beset with indecision, poor decisions, confusion and a constant inner chatter questioning the mundane to the very complicated. There were flashes of light and we delighted in these moments with him. But the daily decisions we take for granted, the ones that ebb and flow, were his inner enemy.

Unlike him, I could make daily decisions of where to go, what to do.  My final decision was to emigrate because I had “new eyes” and not because I could see “new lands”. I had held back for many years. I wanted to be around in case I could share in his ecstasy of finding meaning and purpose. I also stayed to share his pain and his anguish. The guilt of moving far away and abandoning him was gone, and with my parents’ blessing, I was able to uplift a life in Cape Town and head to London. A long held dream of mine and Husband, knowing that I would not have to be around for the call saying that he had died.

In the book “Unnatural Causes” by forensic pathologist, Dr Richard Shepherd says: “I can comment that…death is finally an experience of supreme release and relaxation….I’ve come to the conclusion that when it happens, death is probably actually pleasurable”. I recall the words of the social worker at the scene of his death. She said his flat was ordered and peaceful. He looked asleep and there was no struggle. I am comforted that for him, death was his peaceful exit plan. In death, he did not see new lands, but with new eyes, found a way to move on. 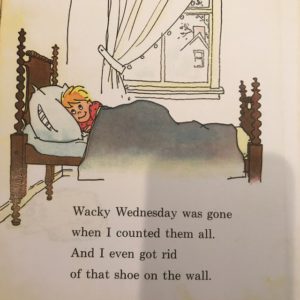 Dave’s favourite book as a child.