In England, you are identified by your full name, your date of birth and your postcode. There is no identity document for everyday use with the sole purpose of providing evidence as to who you are. The idea of a COVID vaccination passport has received much opposition because its use could be extended beyond COVID vaccination-purposes by becoming a general identification document. Many feel that this would be against civil liberties. The same thinking applies to the recent suggestion that proof of identity is needed when voting in the UK. In South Africa, the green identity book (“book of life”) or identity card is the standard way of proving who you are, containing a drained photograph and your lifelong 13-digit identity number.

I can understand the reluctance to have an official form of evidence as to who you are if you consider how the South African identity document came about. During Apartheid a similar book was created but it was only for non-white people. Black people had to carry a passbook with them at all times until 1986. It allowed them to live and work in certain areas, and failure to produce one when demanded by an official, could lead to arrest and expulsion out of “white” South Africa into a “homeland” or reserve. A person’s fingerprints, photograph, employment details, race classification, and the area they were allowed to be in were all in this passbook. Every year, over 125 000 black people were arrested for technicalities regarding a passbook, making it the most hated symbol of the Apartheid era. From 1994 all races could obtain a green identity book.

A postcode in South Africa is not determinative of anything (and not obligatory on rare postal items) other than perhaps a sign you stay in a prestigious area. I remember a very upset CEO in my previous life because the Companies Office had recorded his residential postcode as 8001 and not 8005. This was not for one company where he was a director but around 60 companies across Africa, and I had to oversee these “urgent changes to official records”.

In the UK, a postcode is a powerful set of numbers and letters identifying who you are, and not just as a sign of wealth or class. If you move, best you forget about unpacking boxes and cleaning cupboards, and focus on getting your new address updated with everyone from the vet to Transport for London. With the last move, I had to notify 38 businesses/entities of our change of address, and some had to be changed a few times before the changes stuck. Thousands of changes are made to the UK’s master postcode file every day as people move home and new businesses start-up which amounts to 1.3 million changes a year.

Postcodes are made of 5 to 7 digit alphanumeric characters. The resulting postcodes are not randomly given or assigned. There are rules behind what letters and numbers are allocated. The first two letters refer to the nearest large town or city, or the postcode area and there are 124 of these in the UK . The average size of a postcode area is 776 square miles and the average population is 533 000. The number which follows is a district within that area. There are 3 000 postcode districts in the UK and the last two letters represent on average about 17 homes, flats or apartments unless the postcode is that of a large business or a major delivery point, for example – SW1A 1AA is Buckingham Palace’s own postcode. The use of both letters and numbers is based on humans being able to better remember a mixture of letters and numbers. There are 1.8 million postcodes covering 29 million addresses in the UK.

The history of the UK postcode goes back to 1857/58, when London was divided into postal districts: Central London was divided into EC and WC, and Outer London areas were given N, NE, E, SE, SW, S, W, and NW postal codes. Both the NE and S sectors were abolished later in London and used elsewhere in the UK. Other areas in the UK began to follow, such as the city of Liverpool which was divided into Northern, Eastern, Southern, and Western districts in 1864/65. Manchester and Salford were divided into eight districts in 1867/68. Only in 1917 were numbers added to the postal districts to create sub-districts and this was to help the women postal sorters (a bit disparagingly) while the usual male workers were away at war. 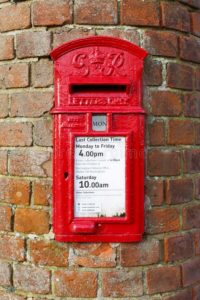 When the world opens-up to travel and you can visit the UK, have your hotel’s postcode handy. Use it with apps to find-out how to get somewhere and how to get back to your hotel (the modern Hansel and Gretel bread crumbs), use it to send all your online shopping to your hotel and if you live here, be ready to rattle it off as the key or magic code to living and working in the UK. I cannot remember my NHS number, Husband’s mobile number, the van’s licence plate numbers and letters, or my national insurance number, but I can recite my current and old passcode in my sleep.