Time passes in mysterious ways. Another December and COVID prevails. With recent plans of a trip back to Cape Town this month upended by a new strain of this peril or “the dreaded lurgy” as the fancier people say here in London, we are at the point where we will not be planning much.

In light of the great peril I was fortunate to be able to fly to Cape Town shortly after my dad had a massive stroke on 8 November. I was not prepared for who I saw in intensive care. The person who had held firm on views, loved a party, was well-read, witty and very much a united front with my mom, was no longer.

Instead, he was physically less, intellectually absent, unable to communicate, let alone move. As much as this statement may alienate others, it left me wondering how there can be a god. Why would a god reduce a person instead of building-up a person, and why allow such a deathly and cruel occurrence? The loss of my dad’s rich intellect haunted me together with the vacuum within which my mom and I functioned those days at the hospital: could he hear us, and could he feel us hold his one able hand and if he got better, what would “better” mean?

Despite medically unanswerable questions, we knew that under the circumstances, COVID would have ordinarily stripped us, and his friends, of this precious opportunity to appreciate him, even in such a reduced state, for what he did give us and what memories he left behind when he was his full self. I also learnt small precious things about him during this time in speaking to my mom and others, and while helping my mom with administrative matters. I heard from people not spoken to for some time and the support was all-embracing.

It was terribly hard to sit next to someone so ill and conjure-up a monologue each time you were together especially since my last conversation with my dad via WhatsApp video less than 24 hours before the stroke showed no signs of him being ill. The sudden and extreme nature of a major stroke meant that the person I knew as dad, was now a shadow.

Nevertheless, I resorted to playing his favourite music for him on my phone and I told him what was happening in London particularly about Ivy who he nick-named Swart Varkie (black piglet) and reassured him that my mom was managing as best one could. I also told him that he could let go, and I thanked him for everything he had done for me and my brother, including having difficult conversations with me.

In the taxi to Cape Town airport, my dad still clutched onto life in its physical form, and we did not know how his final journey would unfold. I hid behind sunglasses and my face mask while I struggled with the question “how do you say goodbye to someone you love and who you have probably seen for the last time in your life?”.

I realised that the question of “how do you?” is misplaced. It is rather a more powerful statement that needs to be made: “I was able to say goodbye” and that was what mattered, especially in a world of COVID where others have not been able to do this in person.

The day after I arrived back in London, my dad stopped breathing. My mom was there with him in hospital, as she always was with him in life. She sat with him until the time came to take him away. Ever the person of grace and fitting touches, she tells me she left a kiss on his cheek in lipstick. I cherish that image of the goodbye kiss of someone who knew him better than he knew himself.

This goodbye kiss on his cheek will be remembered by me as well as my goodbye and the small pebble in my jacket pocket reminding me of him as a mining engineer and all the times he challenged me, as my dad, to think for myself, to value time, to search for joy, and appreciate the beauty in music, paintings and books. 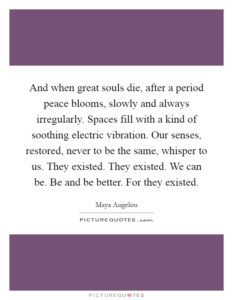