Every day, two out of three people drinks coffee in the world.  According to some, it is the second most traded commodity after oil. Why is it then, that the average person does not drink a decent cup of coffee or know more about it?

With this in mind, my husband and I went to Truth Coffee’s coffee appreciation course. Held in the heart of Truth Coffee’s business, in Buitenkant Street, Cape Town, CBD. The decor of the coffee shop/restaurant is mechanical and edgy. This is a place where metal, coffee aromas and people meet to enjoy the house coffee blend known as Resurrection, made from coffee beans originating in four countries and roasted fresh on the spot. 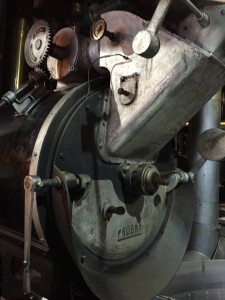 Voted the best place to have coffee in the world, this is a place where Ricoffy and Nespresso dare not be mentioned and a cappuccino is a flat white, not a coffee with puffy clouds of milk floating on brown liquid.  Soya milk is available too and not for a surcharge. Finally someone did the maths and realised that soya milk is often cheaper than cow’s milk.

At the back of the premises, between sacks of coffee beans and coffee machines in various stages of servicing, we sat at a long table, to be educated about coffee. We were so fortunate to have as our teacher, top professional barista and Truth Coffee sales and marketing manager, Jose Vilandy.

A man of significant size, who was born in Angola and at age 11, was kidnapped to become a soldier. Believing that education would one day free him, he fled to a Namibian refugee camp where he lived in equally poor conditions and fled some time after this to South Africa where he became a street child. Next he was imprisoned in South Africa because he was an illegal refugee with no papers.  He found his way when he was released and obtained professional support from a local shelter.  Jose obtained matric and a diploma in civil engineering.  He struggled to find a job in this field, so he worked in restaurants where he worked his way up the ladder, to where he is today. I wish we had time to learn more about him, but alas, we had to focus on our reason for being there.

These are some of the main points were learnt:

☕️ “Coffee” as a word probably entered the English language in 1598 via the Italian word “caffe” with this word originating in Turkey as “kahve”. This word came from the Arabic word “qahwa”

☕️ Coffee may have originated in Ethiopia when a goat herder saw the effects of eating a certain berry on his goats; the dancing goats myth perhaps

☕️  It is ideally in the tropics where coffee shrubs grow.  It takes five or six years for a coffee shrub to produce the berries which contain green coffee beans

☕️  The main coffee growers in the world are: Brazil, Ethiopia, Guatemala and India

☕️ There are two main types of coffee: Arabica which is more expensive, harder to grow, needs humidity and Robusta which is cheaper, has high acidity and has much more caffeine

☕️ The roasting process leads to the flavours of the coffee bean being developed. First, the green beans (which have no aroma) are dried slowly and then they are roasted at 200’C. The beans turn into a medium brown colour and have a coffee smell

☕️ Green coffee beans stay fresh in sacks for months provided there is no moisture and light. Once roasted, the beans are at their peak for about two to three weeks.  The beans will be a very dark brown and will be oily when they are no longer fresh.  Ground coffee stays fresh for about four to five minutes. Never store coffee in the fridge

☕️  One can buy Fair Trade coffee but Truth Coffee believes in “relationship coffee” and in arrangements where they can see for themselves where the money goes and ideally, they enter into an employer-employee relationship thereby ensuring that the coffee bean farmer gets a regular income

☕️  Decaffeinated coffee used to be produced by a bleaching process but this resulted in the final product being chemically tarnished. The process used now is called the Swiss Water process and the final product should have no added chemicals. By soaking coffee beans in water, the water soluble caffeine escapes into the water, leaving a coffee bean with about five percent caffeine remaining in the bean. The caffeine soaked water becomes a highly prized commodity and is used in products such as energy drinks

☕️  Rather order a double espresso and not a single one.  A single shot will probably be burnt due to the extraction process of the ten grams of ground coffee in the holder or basket where the ground coffee is collected for extraction

☕️ It is true that espresso has less caffeine than filter coffee.  This is due to the shorter time (four to five seconds) that water passes through the ground coffee and into the cup. A double shot should produce sixty millilitres of coffee and must be stirred before drinking

What a privilege to have shared a morning with Jose. We took turns making espressos and flat whites, all to much laughter as we juggled heating the cup, grinding coffee beans, flushing the machine, tamping the ground coffee and tightening the basket handle. I will not look at coffee the same way again. We thought we were coffee purists, but learnt that we had been doing things incorrectly. 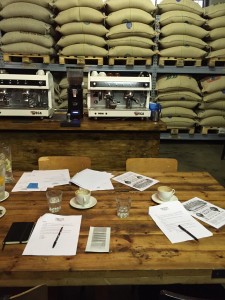