I returned to office for 2 days. Then my annual leave kicked-in for 2 weeks. While on leave, the UK government turned the lockdown-meltdown dial back. I am not supposed to go back to the office until who knows when. I relished the 2 days I had in the office after spending 6 months at home debating EU tax reporting law with our sneezing cat and relying on our dog to interject in online meetings when legal jargon was taking over. Ivy is a Skype or Zoom call regular – knowing when to woof and when to bark. Italy, our cat, has had his tail and posterior featured in a few video calls. 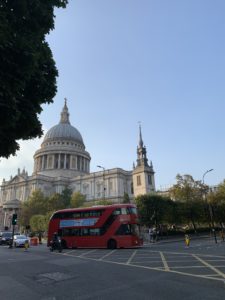 My first day back at the office was like stepping into a time capsule or discovering Pompeii minus the charred bodies (note: no reference to clients). My desk calendar was stuck on March 2020, my water bottle contained 6-month old water with signs of Thames algae, in my cupboard the Swiss muesli had become a NATO hotspot for non-neutral bugs, I had gifts to give to colleagues where the events had now passed (one has since had her baby and my manager is now 6 months passed his birthday) and my meetings folder had print-outs for meetings that were taking place in person in the week that I left the office not to return until 2 seasons had passed. 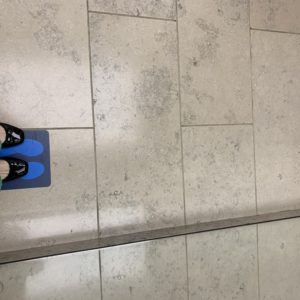 Socially distanced in the work lift

I looked at my files and promptly chucked out (read: recycled) the contents of all but for 2. If I did not need the documents for 6 months then I would not need them now. My goal was: go paperless…..until I saw the bank of photostat machines. I could not help it. After logging on, sinking into my health & safety approved chair, and admiring how well my colleagues had fared under lockdown (why did I not spend more time on my mascara?), I hit the PRINT button. 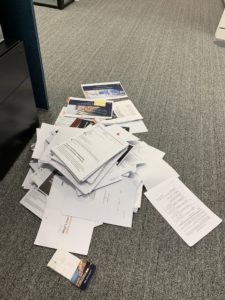 I printed until the one printer jammed and IT had to be called. How glorious it was to see the paper. Even better to take out my highlighters, make notes on printed documents and then realise….maybe I did not need hard copies of the restaurant menu, the latest articles on that thing we all obsessed about before called Brexit and news from The Lawyer (which reads like a legal tabloid at times for what is potting with law firms in England). 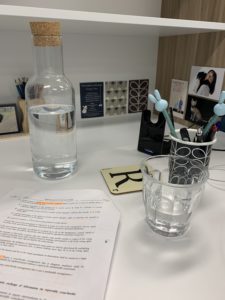 My treasured desk at the office

It was not a productive first day. The next day was spent trying to be productive but having just wound-up at the office into functioning mode, I had to handover and wind-down for annual leave which we were obliged to take in this COVID era before end September so that when this pandemic has settled itself down, we do not all decide to go to Spain or Italy on vacation whatever Brexit rules say on visas. 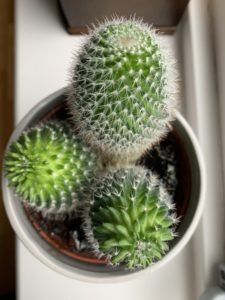 Mr Cactus in his glorious neon green at home

Remember Mr Cactus? I admit, that the lack of my involvement in his well-being for the last 6 months has meant he is now a rich neon green shade that I have never seen before in a cactus. I wrapped him and his bristles in my goodie bag, and dragged him home via the tube just in case we have another lockdown. Funny I should have thought that. Lockdown is here again as I write this albeit slightly disguised as the Rule of Six, the Rule of Thumb or the Rule of Make-it-up-as-we-go. 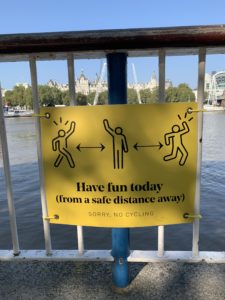 Ready to go on leave as a tourist in my City