We live in an over-populated world. There is no waiting list and there are no vacancies. I do my best in my personal time to stay away from crowded places. I buy groceries online, buy gifts online and do as much as I can in small shops without music and no bright lights.

In December I am adding to my tally of having visited (some more than a few times) 35 countries in the world (with places like the Amazon, Finland, Egypt and Denmark on my have been-to list): I am going to one of the most populous countries we have. My husband and I are off to Bharatiya Ganarajya or India.

Considering that in May this year, I found the side streets in Port Louis (Mauritius)  too populous, this is going to be a challenge. You are probably thus wondering why I am off to India. I am attending an Iyengar yoga 8-day intensive yoga programme (not to be confused with going to an ashram in India) in Pune, which is 164km (3 hours by car) from Mumbai. The latter city is in the province of Maharashtra which in 2013 was home to 112.4 million people!

India as a whole had a total population as at last month of 1 251 695 584 or 17.5% of the total world population, occupying 2.4% of the world’s landmass. This makes it the second most populous nation on earth and by 2025/2030, it will outrank China and rank number one in population size. Having been to China, why not see its population rival and a country which is written about by Rohinton Mistry with a rawness but with an underlying beauty of a colourful nation?

In China during winter, we were confronted at the Great Wall by traders wanting to sell us hats made of cat fur and in India, I am sure I am going to be approached by leather traders selling bags and shoes, considering leather is a key co-product of cattle slaughtering in India, notwithstanding Hinduism.

My better half is joining me because he wants to be there to experience the energy and pulse of this vast country and all its people. He also wants me to have a shoulder to cry on should I see things that do not sit well with me.  Apart from his ample shoulder, the other bonus for me is he is simply the best travel companion there is. He is foregoing a trip to Japan to do Aikido martial arts so that he can be in India instead.

The exact details of the trip after the yoga intensive are still to be finalised but we will travel to the north, ending-up in Delhi.  (If we take a train, it will take a staggering 27 hours.) When there I hope to visit PeTA India’s offices and gain some comfort that someone is helping to protect the temple elephants.  I was tempted to visit tigers in the wild in Rajasthan, but like gorillas in Rwanda and pandas in China, I think it is best to leave them alone in peace.

My favorite fictional non-Bollywood movie on India is The Best Exotic Marigold Hotel (the first one). I loved the one line by the hotel proprietor Sonny Kapoor: “everything will be all right in the end … if it’s not all right, it is not yet the end”.

PS: something to ponder: based on the average population density in India and its demographics, our house in Cape Town (which is a medium size house) would have over 100 occupants if we lived in India and most would be 26.6 years of age and there would be more men than women. Of those women who go on to have children, they will have between 2 and 3 children. Over 80% of the people in our home would be Hindu, more than 13% Muslim, there would be a few Christians, a Sikh and the balance a mixture of other religions/paths including maybe one Animist, a Zorostrain and a Jain. A melting pot in our very home and perhaps one of the inhabitants would finally discover how to use the oven in our home (the kitchen is for resale value) and make us a traditional lentil curry and flat bread assuming we have no load shedding at the time! Further, we would celebrate the centenary of Ghandi returning from South Africa to India. If someone in the house needed to find out how to fix any of the appliances, provided the manuals were in the right language (there are 22 official languages in India), 80 people would be literate, with the predominant official language being Hindi.

Considering that my paternal grandfather was born in Bombay (now Mumbai), was Jewish, schooled in Vienna, worked in England as a tailor on Savile Row where he met my very British grandmother (aka HRH The Black Widow) and sailed to South Africa where he was killed by a car, my very own paternal family could have provided the colourful crowd in my home. Add to that any of the more numerous and louder members of my maternal family (who live easily into their 90’s and are tough as nails; such folk are simply not made like this anymore) who are a website on their own, and we would be a United Nations.

For the record, the office of Archbishop Emeritus Desmond Tutu did respond (see the blog and open letter on National Braai Day) to me both by telephone and email.  It seems that they were unaware that the organisers of National Braai Day still claim that the Archbishop is the patron.  He agreed to be patron for one braai event in 2007. 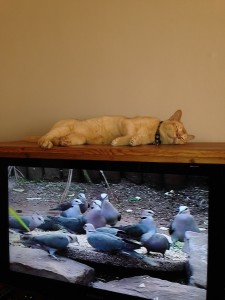 Not interested in the cat DVD playing on TV!

A final word – thank you to my colleague Dorette who had a birthday last week and she made birthday treats for the office which included two vegan chocolate cupcakes for me. Spot the vegan ones! 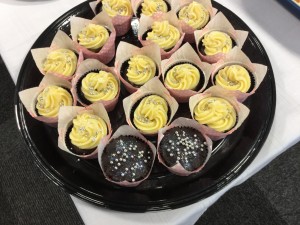 Not even load shedding could stop Dorette from baking