On the river Ganges 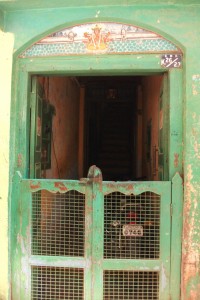 Front door of dwelling in the old part of Varanasi

Hindus believe that they have 4 mothers: their birth mother, the holy cow, India or mother earth and the Ganges River or Ma Ganga (i.e. mother-in-laws and step mothers are excluded). It was to the Ganga where we next travelled, to the very sacred and oldest continuously inhabited city in the world, called Varanasi. The British called it Banares and its original name, or reference to a legendary city located within Varanasi, is Kashi or city of lights and Shiva. It is India’s religious capital. 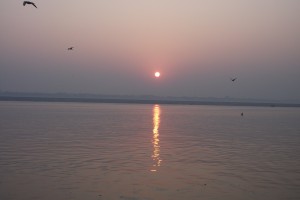 We arrived at Varansai after a long day of Air India flights (with no rats on board) from Pune to Varanasi via a Buddhist and Hindu town called Gaya where monks in maroon clothing got off the plane and monks in yellow or orange boarded the plane. Our hotel transfer person said that Varanasi has a population of 4 million whereas my reading says it has about 1.2 million people. Either way, it is a very populous place. 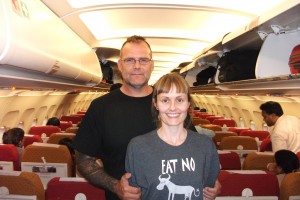 On the plane at Gaya….waiting for more monks to board

It was clear from the airport to the hotel (albeit in the dark) that Varanasi is poorer than Pune and more animals roamed the streets. This was confirmed the next day when we headed to the old part of the city to walk the ghats, being the 90 (or 87) sets of old ceremonial steps that line the Ganges. 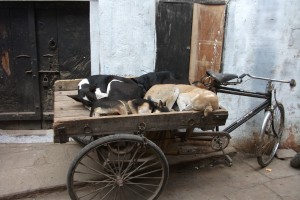 Exhausted dogs in the old city 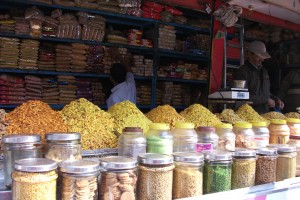 Spices and snacks for sale

We wanted to walk the 8 km to the Ganges but were stopped in our tracks after taking a few steps out of the hotel, by cycle rickshaw riders and auto rickshaw drivers. They swarmed around us and we had no choice but to take an “auto” to the Ganges in what was another harrowing trip in a 3-wheel vehicle sounding like a lawnmower. The driver kindly walked us through the maze of frightfully old buildings that border the Ganges. Of course, along the way, we met his “uncle” who could give us a cheap boat ride. We had arrived in Varanasi wiser than most locals realised and knew about “uncles”, “aunts” and “friends”. We were not that wise when it came to “wives” as you will read below! 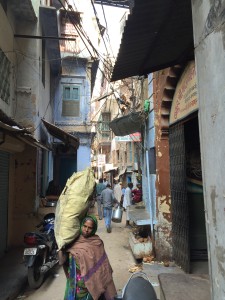 When we did emerge through the maze and faced the Ganges below and in front of us, we were silent. It was like seeing the sea for the first time. The river was low because it was not monsoon season yet it spread out in-front of us with a quiet violet-blue hue. It was clean in most places (the real toxic sludge, effluent and “things” lurk below the surface hence the ongoing dredging), there was no odour (only in the alleys) and the people were colourful, some bathing, others washing clothes, playing cricket (the national obsession), busy with  prayers (puja), or in boats with birds following, with a medicine man sweeping steps and the “uncle” still hovering.  Then we turned around and looked at the buildings we had walked through: weathered but detailed with paintings, columns, balconies, monkeys (linked to Lord Hanuman) hanging from the sides and washing drying. It was a perfect picture of life happening in-front of you. 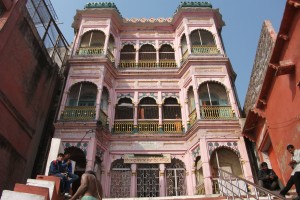 Our first building on the Ganges at the Vijayanagaram Ghat

Once we had parted ways with the medicine man, “uncle” and rickshaw driver, we walked the ghats. We came across goats, cows, dogs and hundreds of puppies walking along the steps. A bhanga-inebriated fellow sold us papadums and a proudly single lady told my husband that he needed to buy me gold jewellery.  Luckily for him, I am not fond of the precious metal but we were in the right country when it comes to gold reserves – India has 11% of the world’s total gold reserves, mainly held in jewellery form.  This is more gold than held by the US Federal Reserve Bank. 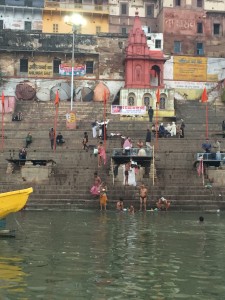 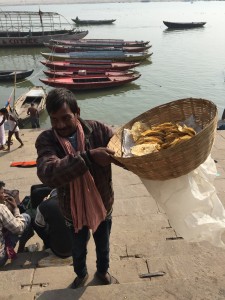 We followed the smoke plumes and headed to a burning ghat called Manikarnika (meaning earrings; a reference to Shiva’s consort who purposefully lost her gold earrings there). True to form, a tout spotted us and never left us.  He was a self-appointed guide who blurted-out facts and figures to us that were not consistent; this was revealed after my cross-examination techniques were put into action. With much difficulty, my husband finally sent him packing, without a so-called donation.  (My next blog will focus on this burning ghat.) 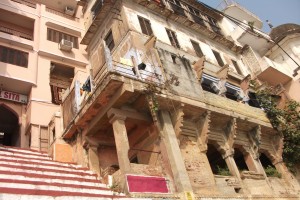 We meandered back through the lanes and alleyways between the very old buildings. It is a plus to be on holiday and get lost.  Time does not really matter and in India, time is a malleable concept.  We did, however, find the famous Blue Lassi shop.  This was the first time we encountered a handful of other tourists. Here my husband had a lassi in an earthenware container (India’s answer to biodegradable containers). When finished drinking or eating what is in the container, it is thrown onto the ground and it shatters. It is past this shop that most dead bodies are carried to the Ganges; in the short time we were there, 3 dead bodies past by. 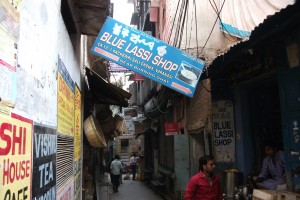 Lane through which dead bodies are carried

On a boat on the river at sunrise, the river and old city are a sight to behold. We had a boat with a guide (who turned out to be an ex-heroin addict and tout who wanted us to buy his “wife’s” silk garments) and an old thin gentleman who was rowing – he never made a sound. In the river, were floating flowers and candles, made all the more serene by the soft movement of the oars. Eerily, there were a few fish rises around our boat.  At least we think they were fish. True to form, a boat came alongside us with paraphernalia for sale. All very convenient but we did manage to decline and not buy anything without offending anyone.  At least we were not offered hard drugs like ecstasy, crack and LSD which we had been offered the day before while watching cremations! 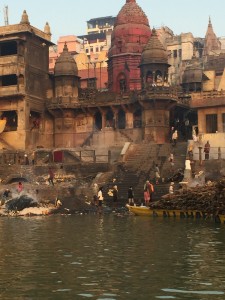 We watched from afar as the burning ghats’ smoke plumes continued and then went ashore to view the “wife’s” silk garments. It caused utter confusion when I said I would not buy silk as I was a vegan (with the correct term for this in India being “pure vegetarian”). After explaining my ethical position in brief, the notion that someone would not eat dairy products (from the world’s largest producer of milk) or wear something made from or involving an animal even if a worm, was seen as an oddity but it did at least put an end to the shopping trip in the silk garment impromptu shop which popped-up in a pink courtyard in the old city (perhaps this is where pop-up shops started). Of course, the tea order we had been promised by the merchants was now summarily and unilaterally cancelled and the “wife” never showed-up as promised. We were not popular and our guide hastily showed us out of the maze. 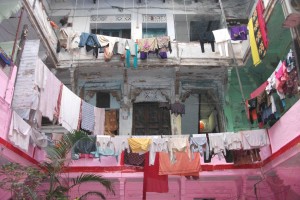 To spend time wandering through the alleys, lanes and streets, dodging animal excrement, litter, scooters and chewed red betel nut and tobacco spit, keeps one alert and alarmed that all of this happens in the shadow of the spiritual river and ancient buildings. It is indeed strange that such a sacred place is not kept pristine but the view is that if the Ganges can take away sins and also be a source of moksha (liberation), it can cleanse whatever may be thrown into it, from floating bodies, ash to litter.

Mark Twain in the 1890’s visited Varanasi and said that it is “older than history, older than tradition, older even than legend, and looks twice as old as all of them put together“.  You have to go to Varanasi (named after two tributaries that join: the Varuna and the Assi), see the flower garlands and offerings to gods, feel the sides of the cracked buildings, watch a medicine man in a trance and try to run away from touts, to understand why this city is indeed the most intense and fascinating place on earth. 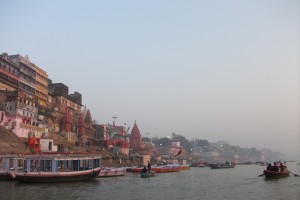