The rabbits in our garden are vegan. I am never quite sure if they are eating my food or I am eating their food. One thing is clear, the resident cats are not vegan. 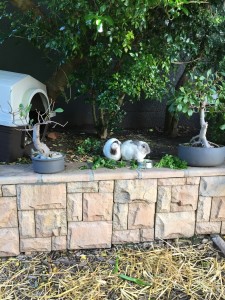 I have contemplated living with vegetable crunching cats but it seems it is not in their best interests to make them vegan. They are reliant on their humans for food (note: the rabbits chase the local hadeda who lands in the garden while the cats watch). It is our responsibility to make sure they remain in the best of health and it is humans who are responsible for factory farms and slaughterhouses, not non-human animals.

Adult cats need a diet which is 80% protein but as they age, to prevent strain on their kidneys, this percentage decreases.  My grandfather, Ted, taught me most of what I know about cats and he said that cats should be fed fresh raw mince. To spoil the cats, we venture into the local German butchery (I know, it is a shock to the system for me!) and they know us: a small portion of lean beef mince for the cats. The cats turn into wild foxes when we give them the mince. Yes, they are obligate carnivores and I am not going to fight nature. 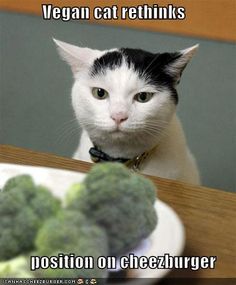 But what is it in meat or animal tissue that cats need that they cannot get from plant sources like humans? In addition to the 9 essential amino acids, cats need two further amino acids: arginine and taurine. The latter is particularly important and although it can be obtained in synthetic form, it is best if consumed in its natural form as found in animal tissue. Without taurine, a cat could go blind.

We have lived with a cat who went blind, but this was because he was very old and not due to diet. It was, however, heartbreaking to see our blind black cat wander aimlessly around, exacerbated by a loss of hearing. I do not want to see an animal battle like that again (even though he remained a gentle giant until he passed – a photo of him is below). 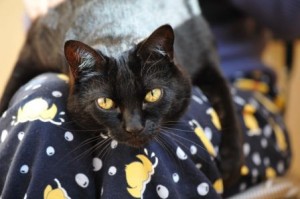 Cooking animal tissue can destroy taurine. Cheap non-vegan cat foods may thus not have adequate taurine and supplementation will be necessary. Fresh raw meat is ideal but sometimes this is not practical.

Arginine is important because without it, cats cannot produce the protein ornithine. This means that a cat cannot produce what is necessary to prevent the ammonia in his/her body from causing havoc. It is a very serious condition that could become life-threatening if it is not caught and treated soon enough.

Cats on a vegan diet may also develop abnormally high alkaline urine because plant proteins are more alkaline than acid.  Meat is more acidic than alkaline, and generally does not lead to the formation of bladder crystals and stones.  Recurring urinary tract problems could also arise on a vegan diet.

Dogs on the other hand are herbivores. It is possible to feed them a vegan diet but it requires dedication and effort. Dogs are also not as picky about food as cats. Just changing a cat’s time or place of feeding could cause mutiny. I am not confident I would be able to persuade the two cats to forgo their dinner meat (whether it really is duck, salmon or chicken I do not know, as it all looks the same) for salad and quinoa. Likewise, I am not going to persuade the rabbits to eat chicken or beef. The status quo remains.