I used to be extremely grateful when eating out if I was given a lettuce leaf or could pick at the garnish at a function.  For years I have been an apologetic vegan.  It got to the point where it was easier to just not go out.

This was also because I was always asked “why do you not eat meat?”. When this question becomes as common place as “pass the salt”, you get quite tired.  I do not always want to be a vegan ambassador and I would like to sometimes ask people “why do you eat meat?”.  If answering the question I am often asked meant we could have an intellectual conversation on ethics, I would not mind it but there have been countless times when I have been asked very (and I have to be blunt here) stupid questions like “so, do you hate plants considering you kill them to eat them?”.  This is invariably followed by a statement that plants have feelings too. At this point, the person making the statement laughs loudly and proudly.

This week I was at a conference. My office had let the organisers know that I am vegan. There were meals and tea snacks for those with religious eating preferences but nothing for me.  I was wondering if I should go and graze on the grass or did the hotel where the conference was being held expect me to pick the raisins out of the muffins. But I travel prepared and did not starve.  My issue is one of principle. Ethical food choices are not taken as seriously as religious food choices.

I remember flying on our national airline when I was a young vegan. I was served a special meal and it was an omelette. At 35 000 feet, I had a small cadenza. It was not that I was hungry but that my personal ethical choice was not respected. There is no excuse today for caterers and chefs when it comes to not knowing what a vegan is.

This same airline gave me dried fruit and yoghurt drops (or white chocolate) as a snack this week. Just a simple read of the ingredients shows there is dairy in the yoghurt drops (the word “yoghurt” should be a give away). Imagine the airline made a mistake with a religious food choice and someone was served ham or shrimps?

What has happened, is that religious food choices have become mainstream. It is perhaps still a novelty to be a vegan. It could very well be that those with religious food choices, had the very same journey I am currently having. Perhaps they too were expected to eat the parsley off the crudités and be overly grateful for a plate of food which consisted of steamed white rice and again, a piece of parsley.

I have found the solution: patience. In the time I have been a vegan, I have seen veganism become more known. Yes, there are people who wrongly  think I belong to the movement where people do not eat fruit until it has fallen from a tree or that I am part of the slow food movement. In time, I will not be the only person at a conference of 1000 people who is vegan. Until then, I will have to bite my tongue, put snacks in my bag, be patient and stick to my ethics. And, I will have to enjoy the parsley! 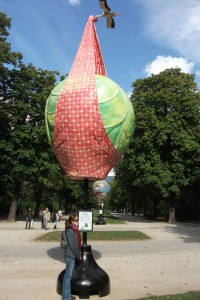 Looking at a giant brussel sprout sculpture in Brussels