♥ When one life ends, another begins ♥

So it was that our puppy flew down on SAA (the insolvent State stork) to Cape Town. She arrived with her tufts of curly black fur and a tail that wags non-stop like the second hand on a clock. Her name is taken from the novel “The Language of Flowers” (by Vanessa Diffenbaugh) and means “fidelity” which is a good quality for a hound.  Ivy, the black mini-schnauzer, is destined for a long life with an unconventional family where the non-human animals outnumber the two human animals. 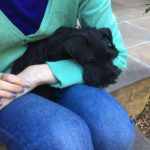 The cats were not sure what to make of this black animated mop that arrived on Spring Day. She is a mop that woofs, chews, growls, squeaks, grunts, farts and reverses when excited. Ivy eats like a high-wattage Dyson vacuum and slops-up water at speed. By the second night, she had proved to be fast enough to take a bite of a piece of pizza, chew a fabric extension cord, drag Italy’s bedding to the kitchen and woof at anything that dared to slink past her.

Her first park walk ended with her stealing a baby’s dummy, admittedly with no baby in sight. Despite the thousands of Rands spent on puppy toys, the dummy is a favourite, as are slip-slops (sorry to Husband about your favourite slip slops) and my Primark bunny slippers. The rabbits have maintained a calm presence and are not phased by the mop in the garden that is trying so hard to get onto the ledge where they graze and nap. It is the tortoises who have endured the harsh effects of our very own “hurricane Ivy”.

The one tortoise woke-up to find that Ivy had dug around him, leaving him on a shaky island, ready to collapse. The other tortoise, well, we are not sure of all the facts but let us just say that Husband found him in the garden doing backstroke on the lawn. The two tortoises, Igloo and Ipad, get woofed at and are now even (rather rudely) tapped by Ivy on their shells, as if to say: “I know you are in there but I want to see what you look like without your USA army kit on”.

We are approaching weekend two with Ivy. Our focus is on the red cat, Italy, who is very afraid of the mop. Only today, did he have a good breakfast. He has lost his appetite but does remain as loveable as always. India has asserted her authority as Top Cat with two very decisive lashings in Ivy’s direction and with hissing that would put a snake to shame. 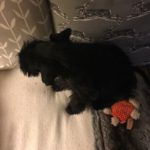 To give all the animals space to breathe, we will take Ivy out with us on Saturday when we go for coffee and do ghastly human chores, like buying groceries. Ivy enjoyed being in the Woolies trolley last week except that she did not notice any meat being put in it. I think she is a tad confused by the sight of curly kale for the rabbits and that other trolleys seemed to have better offerings than ours.

Like Prince George has started his new fancy school, so too will Ivy.  Two days a week, when our super reliable Zim houseman is not at home, she will go to doggy day-care, called “Bowhaus“. The days are structured and play-times are monitored. I read today that dogs can understand 250 words. We are hoping that Ivy includes in this vocabulary and as emphasised at day-care, the words:

“No Ivy, leave the tortoise alone. No Ivy, do not run after the red cat. Ivy, bring back my slipper and drop whatever is in your mouth!”……♥ 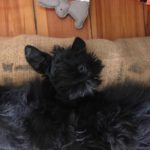