Top of the food chain. The largest brains. The most intellectual of all living species in the history of earth. These words apparently describe human animals. To quote Queen, “We are the champions”, but I beg to differ.

We go about our daily lives thinking that as humans, we are superior to all other creatures. This is embodied in the word “speciesism” which means discriminating against, or exploiting, animal species by human beings based on the assumption of mankind’s superiority.

I agree with Charles Darwin on the concept of evolution except for his assertion that humans are at the top of the evolutionary scale. If we are so superior, why is it that we have capacity to wage war, harm the earth and give birth to helpless offspring that are unable to do anything for themselves at first?

Ever seen a calf being born, even if just on a National Geographic TV channel? How about a chic hatching from an egg? The calf and chic are delicate at first but they are able to stand and walk in far less time than it takes a human baby to even learn to sit-up. Are humans perhaps missing something? If we are so advanced, why have we not found a way to ensure that live human offspring are capable creatures and fairly well-skilled from a very young age, all the while maintaining a large brain capacity?

The law in our country recognises, that at the age of 18, humans should be given the benefits of being able to contract, marry, drive a car and own a firearm.  Eighteen years is a long time to get to this. Some take longer and some never get to a level of being a competent 18-year old despite their old age.

As human animals, we are terribly rude to one another and inconsiderate.  I take the young people who live down the road, who seem to have no mute button.  I also think of my direct neighbours, who during the recent Cape fires, evacuated in the middle of the night whilst we slept soundly and oblivious to the burning embers flying about the sky. It never occurred to them to ring our intercom.

It does not mean that non-human animals are perfection but their behaviour is pure and unapologetic.  Igloo, the tortoise who shares our garden, flipped his sibling, iPad, over the other day in a battle over something. Italy, the red cat, often attacks India, the cream cat, when she is peacefully sleeping on the armchair.  In all this, I see no malice or contempt but playfulness and instant actions.

Some may say that human animals are compassionate and curious because we swim with dolphins, dive in shark cages, go on game drives, have exotic animals in our home or show how much we love zebra by having a zebra head on the lounge wall.  In all of this, it is not love.  It is human superiority. We should leave animals alone, including giving our companion animals space to breathe at home. 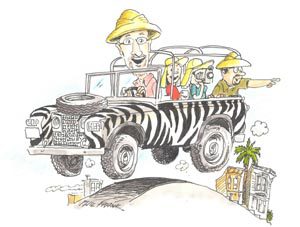 My mom is a fine human.  She dresses elegantly, is well poised and she is graceful. I will not, however, have her head on our lounge wall when she passes at a ripe old age.  I would rather have photographs of her. Hence, why would one want a non-human animal head on the wall? Surely as the most evolved creatures on earth, should we not disrespect other animals and hang them up as trophies of our superiority?

If we are so superior, why are we searching for life on Mars and why are we creating artificial intelligence? Humans will finally prove Darwin right when they stop waging wars, are compassionate towards all beings, are altruistic and care enough not to ruin the delicate home we have called earth.