Hippo in my space

There she was. A hippo in the hotel garden right below our balcony. Soon to be followed by an unarmed guard who ran behind her. We are not sure how she got back into the Zambezi River but she must have because by sunrise the next day, all that was left were large deep footprints below the balcony.

We were in Zambia, criss-crossing the borders of Botswana and Zimbabwe on certain days, for my mom’s birthday. This was her 70th birthday according to her date of birth but more like her 50th. We made her wear a crown at times, a sash on other days, blow out cake candles, wore t-shirts spelling out her name and generally made as much fuss over her as we could. How she purred at all this. Like the Leo she is! 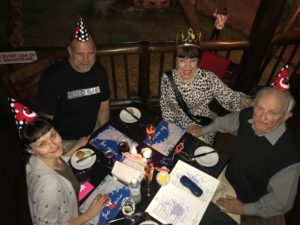 I was humbled by the beauty of Zambia. Never had I contemplated that the wild animals would be so abundant and that the Zambians would be so generous. I was caught-up by all this and realised that I had given-out about R2,000 in tips in US dollars, bought mementos I do not need, bought 8 copper bangles and spent a mini portion of US dollars on the puppy (yes…the giant basket that I could fit in lying down was for her). 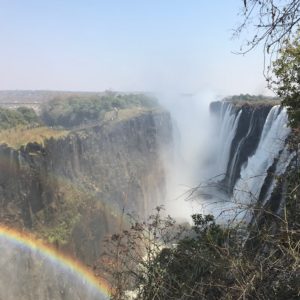 The Victoria Falls were mesmerising. To stand there watching the water fall below and the spray rise above, is magic for the soul. My mom and I were reminded by the presence of a blue butterfly fluttering about the area known as the rain forest, that my sibling was not forgotten. The blue butterfly and its matching emoji have become a symbol of him since his death. How fitting that he would be there watching over us while we starred at one of the wonders of the world. 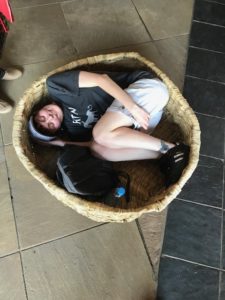 There was a calm sense of harmony and order wherever we went. We saw rows of trucks parked at border points. Nobody was having a moment of rage. Some crossings involved using a ferry across a river while only one truck at a time could cross the Victoria Falls bridge, and provided there was no bungee jumper or jumbee as my mom renamed it. It was fairly calm when Husband jumped backwards off the bridge to a drop of 111 meters in 4 seconds apart from my nerves and my mom’s very pale complexion. 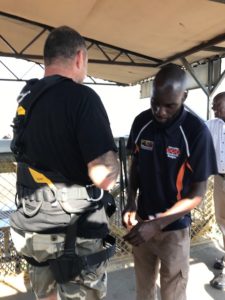 The calmness was emphasised by a Botswana policeman who said to my dad and Husband that the only problem in Botswana with crime is that there is no crime! Oh how I long for us to be able to say that in our own crime crazy country. The quiet could also be found at the Livingstone museum in the town of the same name. It was wonderfully small but had real treasures on Dr Livingstone and pre-historic artifacts. 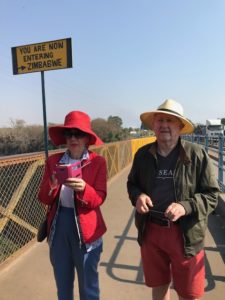 For the brave foodies there were crocodile cakes as a starter on the menu. The meek settled on soft hot bread and the daily soup, followed by fresh bream and on the 19th, vanilla birthday cake. The hotel’s kitten was fed ham, bacon and breakfast sausage. He must have thought, as the only remaining kitten from the litter, that the river gods were celebrating with him over an unknown feast. 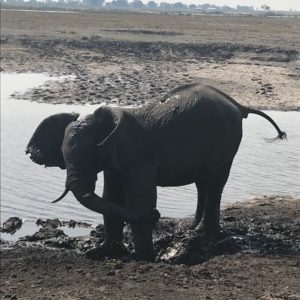 On my first safari we went to Chobe National Park. We shared our safari vehicle with Americans who chattered the whole time and had mixed views on Trump. I happily stoked the fire with questions on the Mexican Wall and his stupid tweets. In the town of Livingston, we spotted a coffee shop offering Trump or Obama coffee. I guess one was with milk and the other not, or the one was fake and the other real.

The safari included a Chobe River boat tour and the land part. It was fascinating to hear how the boundary between Namibia and Botswana along this river, with its island (Kasikili or Sedudu) was determined in 1999 by the International Court of Justice. Botswana was awarded the island which it calls Kasikili and the boundary is where the river is deepest. Part of the reasoning was based on the Anglo-German treaty of 1890 which concerned the spheres of influence between the 2 countries at the time. 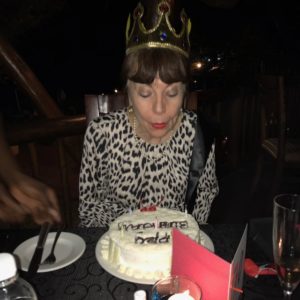 Apart from humans, one of whom exclaimed at our hotel reception on seeing visitors who were all white that she had not come all this way to Africa to see white people, we saw many animals. In addition to the hotel hippo, we saw more hippos and elephants swimming in rivers, female lions, zebras, giraffes, buck, a fox, monkeys, baboons, crocodiles, lizards and birds. We also saw a safari vehicle filed with Asians. One very old man was strapped-in fast sleep on safari while the rest of the people wore masks over their mouths. My mom called them “the Medi Clinic” on wheels. Why come all the way to Africa to sleep and not taste the dust of Africa?

Thanks go to all the local people who shared their lands with us. To Gift who wrapped the dog basket, Moshie the marimba man, Sharon the hostess, Charles the driver, Void at the bungee jump, David the taxi man and basket negotiator, Amos the ferry man, Andrew the fishing expedition driver, Paul the hotel’s everyman, Patrick the cake organiser, Lewis the waiter and so many others – we thank you for sharing the warmth and joy of this part Africa. Could you send this down to the country at the tip of Africa? We could use some of this true UBUNTU.