I do love the odd names of streets, roads and places in England. 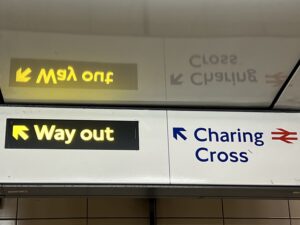 On the train to work in the morning, the final destination is Charing Cross in London. The name Charing Cross is important because it is the place from where all distances to and from London are measured. It sits on a bend or a “turning” in the River Thames, with the Old English for “turning” being “cierring”, evolved now into charing. The cross part of the name refers to last of many long-gone monuments marking stops along the journey of Queen Eleanor of Castile’s body after her death in 1290 although at the station (the final destination in 1290 but minus a station), a Victorian replica stands in the forecourt. From this station, I walk to the River, and get a tube.

Walking to the office from the tube, I cross one of the most important paved Roman roads called Watling Street which went from Dover to Shropshire, then I walk through an area called Cheapside which is on the doorstep of the financial and legal centres of London. “Cheap” has nothing to do with cheap financial or dodgy legal advice (both of which exist)  – it refers to a “market place” in Old English. I also wind around part of the still-standing Roman London Wall before I get to the office. All in a brisk 15 minute walk and a stone’s throw from where the first bomb landed in London in World War 2. 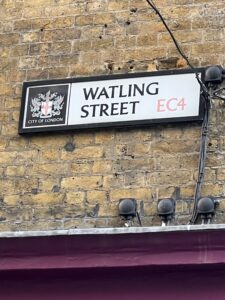 On the train home, and trying to do paperwork while ignoring chattier commuters, I pass Sevenoaks. This Old English name comes from the name given in 800 common time/AD to a small chapel which was called “Seouenaca” – “seofon” was seven and “ac” was an oak tree.  I wonder if this is history being misled; how do we know that it is not a reference to seven okes or blokes loitering about a chapel and not seven oak trees?

The train next stops at Tonbridge which is not to be confused with Tunbridge but the names are pronounced the same. In fact, both places had the same name until the railways put a stop to the confusion that must have been caused by stopping at one and not the other Tun or Ton-bridge (meaning the “bridge of a manor or estate”). Having seen the frustration and been part of it when the trains are slower than usual due to melting tracks, when there is a train ahead that slows things down or when a station is closed, I can imagine the pain of getting a destination wrong because the two towns are miles apart and I know which one I would prefer to get lost in.

I cannot help but smile at some of the other names along my train route. After I reach my destination on my way home, the train goes to: Headcorn and Pluckley. Some of the routes by the same train operator, stop at Bat and Ball, High Brooms, Sandwich and Ham Street. Now I have done some reading on names and realise that many names started with one meaning, and through the centuries, they have become adapted due to ease of use, change of invaders and language developments,  but then they remain in use today with colourful connotations. 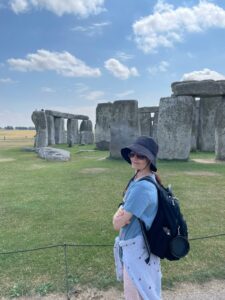 Even a place like Stonehenge has a name that is not quite correct. We recently visited Stonehenge and pre-reading confirmed that while there are stones on the site, it is not, a henge. Apparently a Neolithic and early Bronze Age henge has a circular or oval bank and a ditch, with the ditch inside the bank. This is not the case with Stonehenge because the main ditch is outside the main bank. Archaeologists are thinking of redefining what is a henge to make sure the language is moulded to fit Stonehenge. All that means is that other “henges” may then possibly no longer be henges but still have the name. Then again, does it matter since “henge” never meant what it does today, because it too evolved? It is likely to have come from the word in Old English spelt the same as today meaning hanging, as in hanging or suspended stones. By that definition, Stonehenge meets the requirements even if there are only a few lintels left suspended on upright stones.

We now live in the county of Kent. Known as the “garden of England” by King Henry VIII apparently because a “garden” meant “orchard” in today’s use of the English language. Hundreds of years ago, Kent provided crab apples, cherries and other fruits to much of England but over time, the word “orchard” is now the more appropriate word instead of “garden”. With that in mind, we live in the orchard of England. As for the name Kent, that is a story for another day.