Staring out of the lounge window, I get lost. With the little powerhouse of warmth and energy wrapped in black fur lying next to me, we watch them. 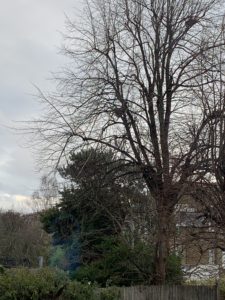 The tree outside with 3 squirrel dreys

There are 3 of them. All grey fur with white tummies. They circle down the trunk of the large bare tree which is now like an X-ray showing their nests or dreys. They scamper up and down fences and walls. They hop like furry frogs to the grass area, sit on the picnic table, flick their tails, dig treasure chest holes and dive into pot plants. 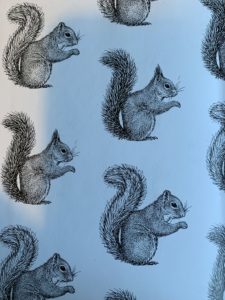 No wonder Ivy is absorbed. I am too. Together we are obsessed with squirrels. Usually we have 3 Grey Squirrels visiting the common area but over the festive (or non-festive) period, they broke tier 4 lockdown restrictions and had a 4th squirrel to stay.

Squirrels are rodents with a fluffy tail or as someone said, they are rats with a better upbringing. They can give a mean bite and are taxis for all sorts of bugs. The Greys are hardy and wired to survive. For a week now, and despite the rain and dash of snow, we have watched one squirrel (aka Fatty One who used to be called Acorn until the lockdown bulge happened to him and his colleagues, and they are now Fatty Two and Three with the illegal visitor called Mr Cummings) bring out the same piece of crisp bread from a dry hiding spot (they always remember where they have buried things) and wave it around to inspire jealousy, then he dashes off again to hide it. 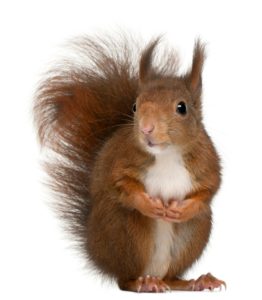 Squirrels only see two colours: grey and yellow. So to Fatty One, if he were in the North, and saw a Red Squirrel, he would think he was seeing a Grey. How amazing is that? Imagine organising your home? It would be so simple with only two colours perceived.

The scientific name or genus for squirrels is “sciurus”.  Yes, it was that chap who crops up time and time again who gave these mammals this name. Aristotle took the name from the Greek “skiouros” meaning “shade tail”. Over the centuries the name was used in various forms across England: “scorel”, “squerel” , “scug” and “skuyrell”. 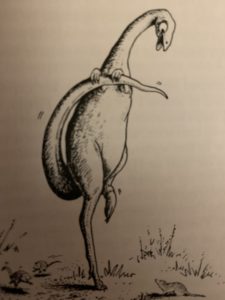 It was about 34 million years ago that the first squirrel or Protosciurus appeared and he looked a bit similar to today’s squirrel even if a bit short of fluff. He lived in trees and in all respects was very much a squirrel. Fast forward to today and excitingly for a squirrel obsessive, there are 267 species of squirrel across the globe except for some countries where there are no squirrels at all such as Madagascar and Australia.  Examples of other squirrels include 8 kg marmots (weighing more than Ivy) and chipmunks. An example of a tiny squirrel, is the African Pigmy weighing just 10 grams. The UK’s native squirrel, the Red Squirrel, is protected. If you have ever been fortunate to see one, they are glorious in their red coats with soft manners.

In the late 18th century, squirrels were hunted by (wo)man for fur or simply to get rid of them as pests. Together with the loss of woodlands, this lead to a decline in the Red Squirrel population which was only made worse when a twat, Mr Brocklehurst, introduced Grey Squirrels from North America to a park in Cheshire. This was one of the many reasons for the decline of Reds, with the final “nail in the coffin” being that Grey Squirrels are hosts and carriers of novel poxvirus and an intestinal parasite. Both are fatal to Reds. Add to this that Greys are streetwise and cunning, and produce more offspring, and the demise of the Red Squirrel is better understood. 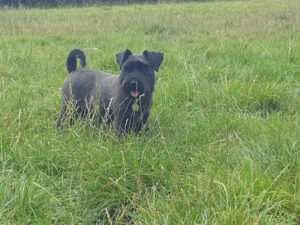 There is so much more to explore when it comes to these animals, such as: they go dormant instead of hibernating, their tail regulates their temperature, their front teeth keep growing hence the need to debark branches to chisel-down their teeth, their back feet twist 180˚ when they are on the descent and they have all sorts of chirps and chatters. I am delighted by the sight of a squirrel, as is Ivy, but while I am quiet, her German-bred rodent instincts kick-in. I do hope she never catches one. During lockdown, when walking with Ivy, we have a new saying which lifts a weary spirit: Think like Ivy: Every tree could have a silver squirrel.

So bewitched by squirrels I am that my mobile phone cover reads: 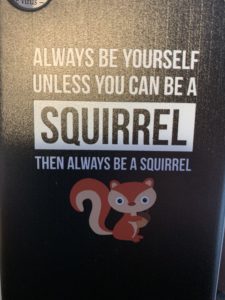 With Husband a professional electrician he too is very fond of squirrels. In cold weather, they make their way into the roof of a home and gnaw through electricity cables, only sometimes killing the squirrel. For him, the more gnawing the better. Not only do squirrels try a place once, they keep going back. This is a constant source of work: fix-up the electricals and try to seal-off the squirrel access. But they come back. He should have named his business: “Scug Electrics – we keep coming back”. 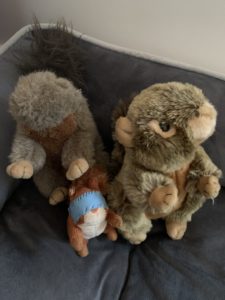