Experts can play an important part in helping misguided humans. I have, however, had my share of questionable experts try and help me with my two Burmese cats. I wish to point out that my now departed black rescue cats never required external analysis. They were very accepting of daily life. 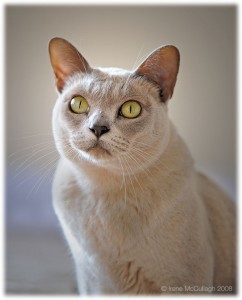 When our uncommon red Burmese, Italy, joined our household 6 years ago, it did not go well for all. My old black cats never got anxious about his arrival, and provided that food, water and love remained in ample supply for all, he was a welcome albeit very noisy addition.

It was the lilac Burmese, India, who turned into a cat-dragon. I consulted an animal communicator and he said I was wrong (my fault….a common theme) to have thought she needed a younger cat to “play” with. She was very happy with the older black cats. I had brought her a problem I was told. You see, she is a pensive older soul and the kitten was an inexperienced young soul in need of her wisdom. India had no inclination to teach him and found his fumbling a nuisance. But it was too late; he was part of the family.

India started to spray on the inside of the kitchen door. Odd for a female cat but it happened. We consulted a bedraggled chap called John. He came recommended as an animal behaviouralist and arrived at our flat in a vehicle held together with cable-ties. He looked like he needed a good scrub with a cake of Sunlight soap. His mouth was so foul that I told my step-son to hide away in his room. John, while eating all my marshmallow eggs, explained that this was all about me. The theme that kept cropping-up.

Without even meeting the cat or kitten in question, or seeing a photograph of them, he pronounced that India was….gasp…in love with my husband. Her behaviour had nothing to do with the kitten. Apparently I sat too close to my husband on the couch, and so it carried on. In essence, I was to be banished to the garage if peace was to reign.

Peace did reign a year or so later when we realised that all India wanted was to sit in a garden and she was annoyed that the evil neighbours’ cats were marking territory on the outside of the kitchen door. Quite a simple explanation and one that did not point a finger at me. It would have saved me quite a few marshmallow eggs and John’s charlatan fee if I had thought logically about the problem. 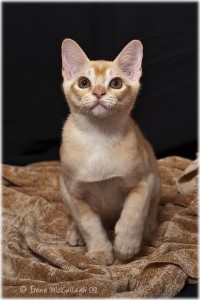 There is a further incident that I must come clean about and it is non-vegan although I was not one at the time. You see, our little red kitten (with his fur the colour of cornflakes and milk) was so perfect and beautiful that I entered him in cat shows. His second show was a huge success. Not only was he Kitten of the Day, Best Cat on Show, he was Cat of the Day. I remember looking at the huge shiny rosettes the size of dinner plates and beaming with pride. There was a problem however…

Our sweet red kitten became a lunatic in a cage.  When judges passed by he would hiss, growl and show his fangs. I was popping Calmettes by the handful, he was being given rescue remedy, valerian and potions; he even drew blood when my husband tried to console him. In the car on the way home from a show, he was calm as ever.

Between this winning show and the next I took him to the local shopping centre in his cat carrier and in a trolley, to get him used to strange places and sounds. He was after all, now in the running for South Africa’s Cat of the Year. All I could see were rosettes, trophies and photos in local cat magazines. In preparation for the next qualifying show, I consulted another animal communicator (note that they are different to behaviouralists) and in a terribly camp fashion he explained the reason behind our kitten’s bad behavior:

“Darling, this is all about you. Your kitten knows he is beautiful. But why do you have to share it, he wants to know. You need to work on yourself and leave him alone!“

You know, he was right. For good measure we did one last cat show. Instead of metal cages, the cats and kittens were in enclosures made of a tent type fabric. All the other 90 cats and kittens on show sat or slept in their enclosures except Italy. From the back of the hall, you could see our red kitten attacking the sides of his enclosure and it swayed. Everyone knew me by then as “the owner of THAT red kitten”, followed by “Shame“.

I withdrew him from final judging at that show as neither myself nor the judges could handle him. His final report card said: “Such a perfect kitten. Pity about his attitude problem.“

The problem of course was me. Not him.  ॐ