With the impending trip to do yoga in India, I decided we needed to know how to cook Indian food.  Off we headed to the popular restaurant in Long Street, Cape Town, called Masala Dosa, which is named after a popular southern Indian breakfast dish.  We were taught by Amit who owns the restaurant, is a vegan, an Iyengar yoga enthusiast, belly dancer and happens to not be from India, but from Israel where he was born in the Red Sea area.

The Indian cuisine at Masala Dosa is southern Indian with a few unconventional dishes. We are heading off to the west and north of India but learning anything about Indian cooking, no matter the region, could only improve our knowledge.

We were first introduced to numerous spices and the origins of the word “curry”.  There are two versions: the word may have come from the Tamil word “kari” meaning sauce (such as gravy) or it comes from the Bangladeshi word “torkari” which is a general word used in Bengal to describe what westerners would regard as being curry.  The word “masala” is used in India today to refer to curry. Hence, mixing sweet or savoury spices would be part of the process of making a masala.

First we learnt how to make masala chai (with the latter word meaning tea) with soya milk.  The spices were lightly dry roasted in a pan to release their natural oils. Then they were finely ground and added to a stove-top kettle with hot soya milk and sugar. It tasted like a warm spicy milkshake. I will definitely try this chai at home. We enjoyed the chai with aloo tikki. These are potato dumplings with roasted spices coated in a gluten-free batter served with tomato chutney.  This is one of the dishes on the restaurant’s extensive vegan menu. 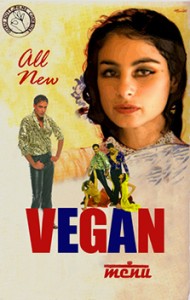 It was time to next make roti’s. This flat bread is easy enough for even me to make.  It is made simply with flour, water, salt and a dash of sunflower oil. You can also substitute normal all purpose flour with spelt flour, wholewheat flour or stone ground flour. Roti’s do not need baking (but do need to be set aside for the gluten to activate – if it is half a cup of flour you have used, the dough must be set aside for 20 minutes) and can be cooked in a pan with a little oil.

With strict instructions on the proportions to use, we each made a savoury spice blend which we then used in a vegetable masala. My masala had cauliflower, tomatoes, chickpeas and onions. Thinking I knew what I was doing, I decided to add salt. When grinding the salt cellar, I managed to unscrew the lid and the whole cellar full of salt landed in my masala! That was the end of my cooking. 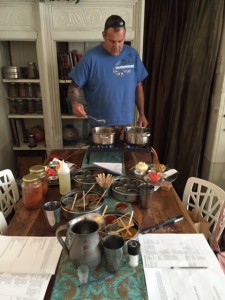 Amit was awfully polite about my mishap and added all sorts of things to the masala to absorb the salt but it remained too terrible to eat. When it was time for lunch, we enjoyed our roti’s and those masala’s that did not taste like the depths of the salty ocean.

Undeterred, at home I used one of our spice blends in my weekly soup. It gave such life to an otherwise typical vegetable soup.  If all I am able to do is make roti’s, masala chai and masala soup, I will be chuffed.

Husband again proved to be more comfortable in the kitchen than me; added to his household responsibilities (which he undertakes without any lists or prompting) will now be making vegetable masala and trying the recipes we were given by Amit.  I thank the sun and the moon that 17 years ago I found such a dependable husband.