A flag and leopard print

It must be time to leave the country. On Sunday, at the terribly fancy Twelve Apostles Hotel overlooking a choppy sea, the puppy barked. Yes, your companion animals may join you in the Leopard Bar area. 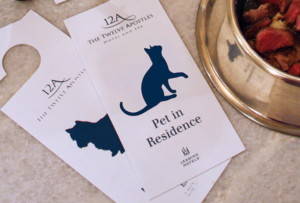 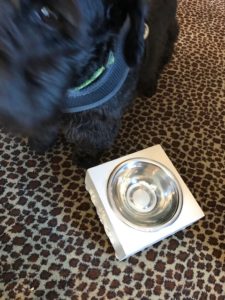 Ivy moving from her water bowl

The puppy caused some stir in the lounge with its animal print carpet (note to self: would my mom be camouflaged in the lounge?!) while we sipped our espresso-sized cappuccino’s at an almost Mayfair price. Some guests did not like the barking puppy. But these guests were the ones that were overly demonstrative when their fellow guests arrived. The pot calling the kettle black perhaps?

I do love the Twelve Apostles Hotel. I have hidden away in the underground spa on many occasions with not a whim or care in the world. Such is the place’s dedication to companion animals, that they too are pampered even if not allowed in the spa. There is a “pet menu” created by the hotel’s executive chef and I can see, Italy, our cat, licking his chops on the ostrich burger’s gravy and Ivy licking her chops at the thought of licking the gravy off Italy’s whiskers. 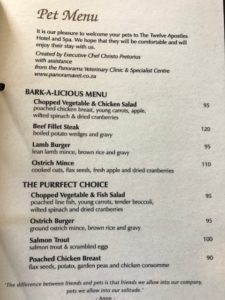 Now one may ask why we were having a leisurely early morning cappuccino when we are in the process of a move that makes Brexit look like it is a simple transaction? The glory of our own Exit (at work called “Chrexit” which has a nasty Russian ring to it) is that we are packing in so much more into our days. We want to be tourists in our own country. We want to bask in the bounty it offers and the feeling of being upper class, while having ample vitamin D flood through our bodies. 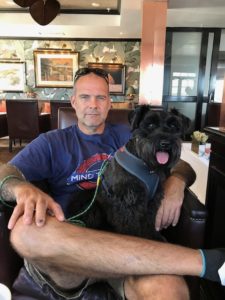 Maybe it takes one to decide (voluntarily, of course) to leave a country to value it. Something does shift. For the first time on a Sunday evening, we did not watch the whole Carte Blanche programme otherwise renamed Corruption Blanche. Instead we watched snippets of it and the rest of the time we laughed with Trevor Noah at the craziness of our country. As long as we leave South Africa with a broad peaceful smile and as its ambassadors abroad, all should be fine for the two Malan humans and two animal companions.